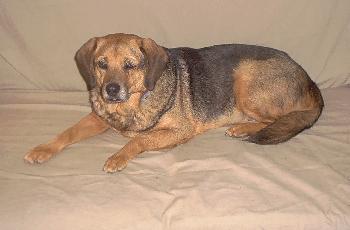 Dahlia
"Our beloved Dahlia left us in August of 2014. We had only two short years with her but she truly made them memorable. Our constant companion her ambition in life was to be petted 24/7. She almost achieved it. Lovable yet totally demanding of attention, sweet but pesty. I don't know how I am going to work in the kitchen or change the beds without her constant assistance. She was a wonderful little character and we will miss her dreadfully." 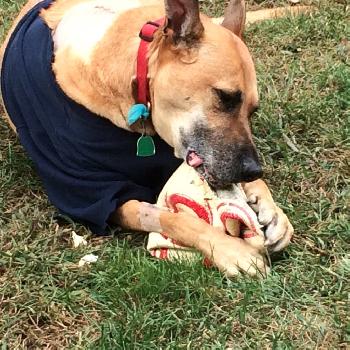 Diego
Diego's Rainbow Bridge from his foster Diego Our family puppy had passed away in May, 2015, the result of renal dysplasia. He had not even reached his first birthday. Throughout that summer we considered adopting another dog, but we both needed time to grieve Jack first. In September, after many discussions, we decided that we would like to foster an older dog, maybe one languishing in a kennel. We wanted to share our home and love until our foster was adopted into his forever home. When my granddaughter and I first spied Diego on the RORR website, we could not believe that no one had grabbed this gorgeous animal for their own. We quickly made arrangements with Karen to meet him and soon after he was ours to care for. At first he was very anxious, never sitting still, and barking furiously when the wind rustled the leaves in the trees. His favorite pastime’s were eating, walking, and playing ball. Although, he didn’t really seem connected to either of us, we adored him. After a few short months, we learned that due to a health problem that caused him to drag his back legs, we could no longer take him on mile-long walks. Then came the snow, and we discovered another joy held close in Diego’s heart. He would leap over the mounds, sink, dig himself out and then do it all over again. He would have stayed outside all day had we let him. But we saw that the cold adversely affected his joints and we had to curtail his time outside. However, we also learned that he loved his warm bed and being petted as we would massage the warmth back into his legs. It was during those winter months that we saw Diego had come to love us. We couldn’t leave a room without him following, he would sit at the front door when we would leave the house and be right there again when he heard us coming home. He slept with one of us each night and would patiently wait for us to wake up in the morning even though he was usually starving for breakfast. If we were distracted and he wanted attention, he would come and lay his big [and I really mean ‘big’] head on our legs and look up at us with his warm brown eyes. We would stop whatever we were doing and pet him until he would lie down at our feet, satisfied. We could tell he had physically aged in the time he was with us, but neither of us knew how much. Diego’s greatest joy was playing fetch in our backyard. I always took out two balls and wouldn’t throw the second until he had dropped the first. There were times that he was sharper than I was and if I inadvertently left the first ball on the ground as I threw the second, Diego would grab it and then run like the devil. He would [unsuccessfully] try to stuff both balls in his mouth. As exhausted as playing ball made Diego, he would have run back forth for hours if I had let him. On the last day we played, he won the “battle of the balls” and I let him keep both balls at his feet. It was a beautiful day and he elected to stay on the deck rather than come inside after we had finished our playtime. I brought his water out to him and then my granddaughter and I left to run an errand. When we came home, Diego had passed away. I cannot describe the grief that clutched at our hearts. I wondered then and sometimes still do, if I should have not have let him play so wildly. I always come back to he lived with joy. We miss him every day and everyday I thank God that I had the chance to spend that time with Diego, to know him and to love him. I have heard that dogs come back at night and lay at the foot of your bed and so I whisper goodnight and tell him that I will always love him. 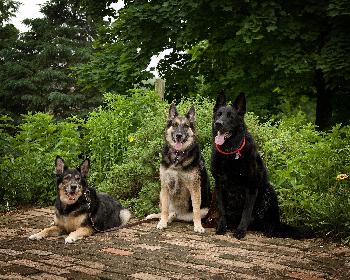 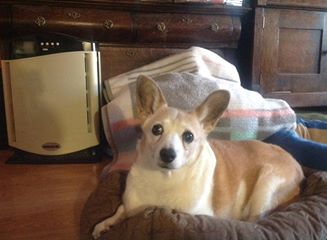 Dorie
Yesterday was a hard day as both RORR's foster of mine, Lady(Eski) and my former RORR foster who I had adopted both crossed the rainbow bridge. Sunday was the day when, for very different reasons, I knew it was time. I feel absolutely certain that Dorie (corgie) was asking me to help her go. She had lost her ability to walk and had no interest in food. She just stared at me with her big eyes, pleading. Lady's form of dementia had left her so agitated and unable to even find her water. She had a seizure like attack Sunday night. Dorie was somewhere in the teens but had a rough life before I got her. Lady was 16 plus. Dr. Harman, Sr. and the staff at Hillside were wonderful. He agreed with my decision and could only have treated a few symptoms on the very short term and not changed the outcome. They are both buried in these WV hills. My son, Andy, was my angel for that responsibility. My little Gracie is so lost today. I am loving up on her.

Reach Out Rescue is an approved 501(c)(3) organization. All donations are tax deductible.